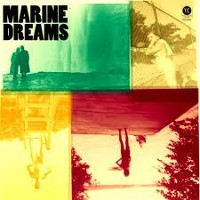 Marine Dreams is the solo project of Ian Kehoe (former Attack In Black bassist/songwriter). His self-titled debut album has an emotional indie-pop feel with a lo-fi folk-rock sound. The record is mostly self-produced, and was recorded in his hometown of Welland, Ontario in a studio shared with brothers Daniel and Ian Romano. Instrumentation on Marine Dreams features contributions from all of Kehoe's old Attack In Black pals, as well as appearances by Shotgun Jimmie, Steve Lambke, and members of Hunters and Anglers.

Stand out tracks include "Season In Hell", which showcases driving basslines and climaxes with a guitar solo. "Sudden Dark Truths" has a darker timbre than most of the album, and is memorable for its retro-rock distortion and suspenseful drum fills.

Marine Dreams finishes on a softer note, with "I Can Laugh" and the outro "Marine Dreams". Kehoe's vocals carry the melody throughout the verses, with subtle accents on bass and guitar. Marine Dreams is a fantastic album in the continuous saga of post-Attack In Black solo projects.