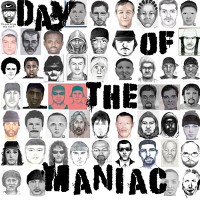 Day of the Maniac
Little Whore ( )

Day of the Maniac is an experimental album, released by Edmonton’s independent rap label Little Whore Records in late 2010. Although Little Whore Records is mostly known for socially-conscious hip-hop artists like Corvid Lorax and D.B. Buxton, Day of the Maniac comes across more like listening to the audio track from a 1980’s horror film. In fact, classic cinema may be the source of the majority of the album’s sample-based sounds. As a “band”, Day of the Maniac features people who prefer to remain anonymous (possibly from related Little Whore Records projects and other Edmonton-based acts). The only person who is credited on the album is Madame Wang, a producer who is associated with several Little Whore Records releases as well as other Canadian hip-hop artists.
Day of the Maniac is mostly a collaboration of obscure and disturbing vocal samples, mashed-up with ambient dissonance. Typical rhythms found within popular music are discarded in exchange for unpredictable percussive loops. Some interesting songs include “Watching Description” and “Panic”, with samples related to sexual infections and abuse and break-beat interludes bordering on avant-garde jazz. This album is definitely not intended for consistent play, but it may be one of the most demented productions of art-rap sampling in existence.