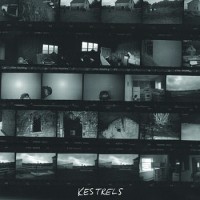 Kestrels are an indie-rock trio from Halfifax, Nova Scotia, with unique folk and punk influences. The Solipsist is a four song EP, which is the band’s third release overall. With three new original tracks and a cover of Black Tambourine’s “Throw Aggi Off the Bridge”, The Solipsist acts as a snack for fans’ anticipation of their second full-length album. The introductory song on the EP is “The Light”, which is a fuzzy lo-fi rock track with a post-punk feel. This song is possibly the most dynamic on The Solipsist, as it climaxes with a noisy guitar solo before dropping into the final chorus.

The second track, “What Happens”, shifts from melodic pop-rock verses to overdriven choruses with distorted and technical instrumental bridges. “What Happens” is the most sporadic and upbeat song on the EP. “Dead Time” contrasts the first two tracks with a more experimental structure. The song seems to change between a folk-rock ballad and an emotional pop-punk anthem. The Solipsist closes with a Black Tambourine cover which highlights the band’s rhythm section, and provides an exciting jam-out to end the EP. Kestrels have a distinct and infectious sound that isn’t afraid to be overly noisy, or overly melodic.