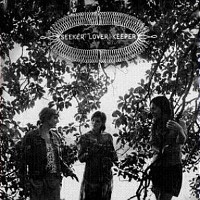 In the last few years, the phrase ‘super group’ seems to be everywhere on the music landscape. Bands such as Them Crooked Vultures, The Raconteurs, and last year’s break out favourite Wild Flag are just a few examples of musicians who have come together for a project outside of their regular day jobs. In 2011, three Australian musicians came together to record under another super group banner, albeit one that is a bit more under the radar.

Sally Seltmann (who has three albums on Arts and Crafts to her name and co-writer for Feist’s hit “1234”), along with Sarah Blasko (three albums released on Universal) and Holly Throsby (four albums released on Spunk Records/Southern Records) have formed Seeker Lover Keeper. Their first self-titled release has already gone to #3 in the Australian record charts.
The first four songs on the album deftly showcase both the songwriting and vocal talents of all three performers. The hushed quality of “Bring Me Back” followed by “Light All My Lights,” which starts off like a percussive-folk version of Kanye West’s “All of the Lights”. “Bridges Burned” is a breezy tune with pretty harmonies and a twinkling piano. Arguably the highpoint of the record, and contender for song of the year, is “Even though I’m a Woman”. With a piano melody running throughout and a beat that only kicks in at the 40 second mark, the crushing honesty in the lines, “I’d be lying if I did not say/I love you more when I’m missing you/it’s why I’m always away” will stick with the listener long after the song ends.
While the album puts all the strongest tracks at the beginning, there are delights throughout the album. Seeker Lover Keeper is surely one of the most charming albums to come out in the last few months.