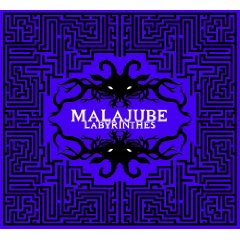 Following up the massive critical success of their last album, Trompe-l’oeil, Montreal’s Malajube return with their third release entitled Labyrinthes. In interviews surrounding this release, the band talked about having made a “strange record for the fun of it” and they certainly have. Opening track “Ursuline” is a good indication of what the rest of the of album holds. It opens with a pretty piano melody, explodes with a giddy rush of indie rock enthusiasm, and then dives into slower, prog rock like terrain for the last three minutes before it draws to a close.
This is an album filled with individual moments to draw the listener in before the band suddenly zooms off in another direction, often within the same song.    Drummer, Francis Mineau propels both “Porte Disparu” and “Les Collemboles” forward while “333” contains some of the most anthemic moments you’ll hear all year. The dream pop sounds of “Heresie” and “Dragon De Glace” are definite highlights with hushed vocals that carry the listener away on a cloud before the crunching guitars of the latter brings everything crashing back down to earth.   The aggressive sounding “Cristobald” closes out Labyrinthes in a fog of prog rock and demon like voices.
Like British bands The Coral and Super Furry Animals, Malajube could easily fill an entire album with radio friendly indie rock songs but instead have chosen to follow their own path. On the first few listens, some of the more drawn out instrumental passages stand out but after that, it’s the amazing melodies that start to shine through. Labyrinthes is an album surely to end up on many “best of” lists at the end of 2009.