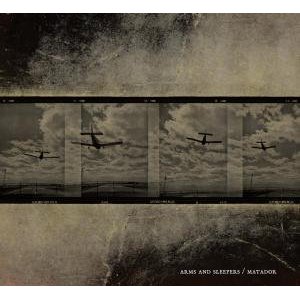 Arms and Sleepers is an atmospheric electronica duo comprised of Max Lewis and Mirza Ramic that formed in 2006. In that time the New England band has been very busy releasing multiple EPs as well as two albums, the latest of which is Matador released in late 2009. On the band’s myspace site there is a black and white picture of a hazy night lighted only by street lamps in what looks to be a deserted Parisian street that feels like it could be ripped straight from a Brassai photography book. That picture captures Arms and Sleepers sound very well – dimly lit, lonely, hazy, and dark.
Matador has a mixture of both instrumentals and tracks with vocals. It is the latter of these that tend to stand out the most. The title track has a lazy electronic beat with dark piano twinkles and guitar which then lets the sun in midway through with effective use of the vocals. The mixture of male/female voices on both “The Architekt” and “Twentynine Palms” add a lovely texture to their soundscape and are definite highlights.

While a few of the tracks on Matador float by without registering much with the listener, there is more than enough on this album to merit further investigation into Arms and Sleepers’ well stocked back catalogue and the handful of new releases set for early 2010.