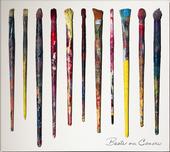 In their recent review for the new album by Thievery Corporation, Pitchforkmedia.com talks extensively of the “travelogue-y lounge” explosion that happened in the late 90s and early 00s. It was a scene in which music producers took Western electronic beats and married them with the traditional sounds of Latin America, the Middle East, and Asia. When done well, the music will immediately take you back to great nights out at hipster bars where you and your mates reminisced about the many exploits of the previous summer. When done poorly, the only thing the mind will conjure up is an older aunt/uncle who has far too many fake African masks adorning their condo walls. Happily, the self titled debut CD from new Montreal band, Beats on Canvas is much more in line with the former than the latter.

Beats on Canvas is a trio comprised of Martin and Dominique Bernard along with Catherine Latendresse who have crafted music based on the paintings of Marc-Bernard Phillipe. The album opens up with two fine examples of downtempo, the Asian sounding “Doki” and “La Joconde Et Ses Trois Fantômes” which would not sound out of place the first Zero 7 CD. The first album highlight appears with the track “Good Spirit”. With its forlorn piano, horn and string arrangements, “Good Spirit” is much more melancholy than the rest of the album but wonderfully so, evoking not so much warmer climates than cold, desolate Canadian winters. This is immediately followed up by another highlight in “Sinking the 8th Ball in Zaire”. The 90s hip hop/ jazz beat is matched with great horn stabs and some lovely acoustic guitar playing. The missteps on this debut are slight. Both “Ramadan” and “Bwa Kaylman” don’t seem to go anywhere before just simply ending (although it should be noted that “Ramadan” has an excellent static electronic sound buried in the mix that is screaming out to be remixed and brought to the forefront).