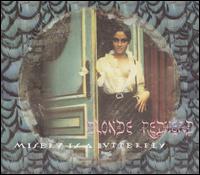 Since 1993, Blonde Redhead have functioned as the conservative response to Sonic Youth; bashing out noise rock records that squeal with all the force of Moore and company by with none of SYÃâÃ¢â¬â ¢s tendencies toward liberalist pigfuck or underground affinities. In short, Blonde Redhead have always been the bookish Sonic Youth but on Misery Is A Butterfly the band has succeeded in overshadowing Sonic Youth for sound innovation from within the context of an existing style. Misery Is A Butterfly is a frosty departure from anything that, on an instrumental level, even partially resembles what weÃâÃ¢â¬â ¢ve come to expect from Blonde Redhead. Where once electric guitars squealed, strings now swell. The howling squalor that, even on the cleanest art rock records is always lurking around the edges of one instrument or timbre disappear here in favor of a detached transcendence that lets the songs float in the ether overhead. While ÃâÃ¢â¬ÅDoll Is MineÃâÃ¢â¬ï¿½ and the title track are surely the best tracks on the record, itÃâÃ¢â¬â ¢s ÃâÃ¢â¬ÅFalling ManÃâÃ¢â¬ï¿½ that provides the best synthesis of BRÃâÃ¢â¬â ¢s previous style with this new one and gives the only sure clue that this is the same band IÃâÃ¢â¬â ¢ve been listening to for ten years. Misery Is A Butterfly is a beautiful, unexpected record with a sound totally unlike anything else going on in music right now. While the point of view on this record is a relentlessly modern one, there is something in it that touches on something much older. If art rock had existed in the Victorian era, it would have sounded like Misery Is A Butterfly.