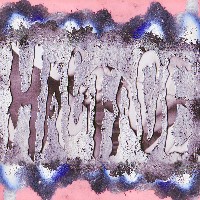 Frozen in a haze of beer and earth stench, my sight is fixated on four unnaturally blonde figures dressed in all-black. Charcoal markings streak across their faces obscuring their identities. Shrill vocal shrieks chant verses into the thick atmosphere that looms over the dim lighting. The venue swirling with a suffocating din of guitar feedback and the crowd’s uneasy anticipation. Calgary, Alberta’s Hag Face, the conjurers of the vivid sonic imagery, have made an offering to the dark lords with their latest and first official full-length, R.I.P.

In the short time spent listening to this album, some opinions that have lingered in the air have likened it to “pure evil,” “being hit by a truck,” and “the sound of nightmares.” Little wonder that the song titles on R.I.P. ring true to this form, with names like “Worst Nightmare,” “Old Hag,” and “Baby Doomers.” Hag Face have been around for just a few short years, but quickly garnered attention for their bouncy and catchy garage-punk. In the manner of the Grand High Witch, they have shed much of their charming singalong skin, revealing a more mature and leathery outright noise rock. This album has an eclecticism about its concoction of noise, however, drawing doom from early Black Sabbath, lo-fi production from early Mayhem recordings, and mixing it in with a healthy amount of their usual upbeat Bratmobile and Bikini Kill punk rock references.

For those covens that prefer their musical experience to cast a similarly trance-inducing spell as the concoction they are stirring, R.I.P. is a captivating horrorshow that will chill to your bones.