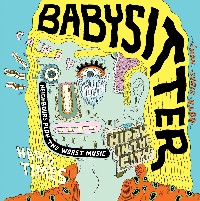 I never did much babysitting and I never had a babysitter that stood out as particularly cool when it comes to taste in music. The latchkey/digital generation has high expectations and short attention spans though, so it’s about time we find someone able to take care of our musical demands for the time being.

And finally, we have the digits for Montreal’s Babysitter. After seven self-titled tapes, plus split and collaborative releases with Hag Face, Korean Gut, JLK, and Monster Treasure, the three-piece is finally able to reveal yet another self-titled album, but one that any cool babysitter would play for the kids once Mom and Dad had left the house.

With this Psychic Handshake label debut, they open with "Exploding Youth," squealing feedback and a singer tunefully yelling over the distortion as the song breaks into simple guitar, bass, and drum lines. The opening seconds of Babysitter’s full-length self-titled album brought on a wave of early-2000s garage-rock nostalgia. While no shocker, this track clunks along with a slightly sloppy verse-chorus structure and an easily digestible guitar solo, standard forms for contemporary alternative rock. The second song, “Hard Times,” however, leads into a much more angular form --the bass guitar is often hacking the key in two, with disjoint lines that somehow fit in between the jangly guitar lick. A few tracks later feature a free jazz inspired jam, aligning with the aptly named, “Neighbours Make the Worst Music.” The art punk aesthetic grows stronger as the album progresses further into other experimental and conventional territories both. Vocally, fans of Fucked Up might take pleasure in alternating Babysitter’s tuneful roughness and collaborating JLK (of Moss Lime) sweetness. Fitting in with post-punk criteria, allusions to The Fall, The Ex, or Television should be blatantly obvious at various places throughout the album and interspersed touches of off-tune and squealing saxophone give way to other comparisons of John Zorn and the like from Frank Zappa or Mike Patton circles.

Sometimes it’s quite difficult to tell if the musicians in Babysitter are correctly playing wrong by accident or masterfully playing incorrectly on purpose. Despite that, the results provide a noteworthy album’s worth of intense psychedelic freakout jam sessions that sound magnificent with or without the adjective of ‘cool’ preceding their name. Forget the sitter though, this album will most certainly rock out in the context of any of the following: lo-fi garage rock, psychedelic krautrock, alternative punk styles, Dad’s first band with the kids.