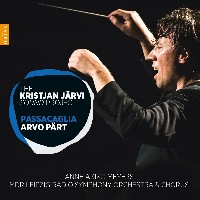 First of all, if you’re at all unfamiliar with contemporary Estonian composer, Arvo Pärt, go give a quick listen to one of the masterpieces of minimalism, “Spiegel im Spiegel.” This 1978 work for a stringed instrument and piano repeats ascending three note arpeggiations with simple variations, mirroring them with a slower descent on strings, and providing a cinematic mood frequently used in films. Next, check out his tremendously endearing 1997 interview with the ever expressive Björk, on BBC’s Modern Minimalists.

In celebration of Pärt’s recent 80th birthday, an album of his works has been compiled by award-winning Estonian conductor, Kristjan Järvi, who has dedicated it in honor of this anniversary. Järvi has come to these recordings via the MDR Leipzig Radio Symphony Orchestra and Chorus, featuring American, Anne Akiko Meyers, on lead violin.

The opening piece, Pärt’s 1968 “Credo,” overturns the traditional mass setting in a dissonant and atonal take on the easily recognizable Bach “Prelude No. 1,” played by piano and choir despite the rest of the orchestra’s disruptive protest. “Mein Weg” best presents the tintinnabuli style that he became well-known for, a bell literally being struck throughout. Some may recognize “Fratres” from its use in the film, There Will Be Blood. The work’s intensity in warbling strings and arpeggiated bowing clearly fitting in the severely dark beauty of Paul Thomas Anderson’s vision.

Short of analyzing the musical theory behind each piece and comparing it to where it is set historically, there is simply too much to potentially learn, understand, and say about every single piece here. Rather than go into depth about Pärt’s ability to take simple lines and supplement them with melodic variations, simply know that this disc displays some of the reasons he is a master at creating works that speak to this era’s taste in simple joyous and melancholic beauty, leaving little wonder at why he is the world’s most performed living composer for a number of years running.