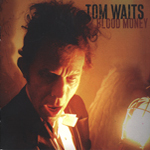 Blood Money is a macabre journey through the multi-faceted talents of Tom Waits. Sure, his voice may sound like the strained and hoarse growlings of a misplaced death metal vocalist, but he does so much more with this damaged instrument than any Boltthrower song could.

The opening track is "Misery is the River of the World." Clever, misanthropic lyrics and jaunty circus-style music make the listening experience uniquely surreal. The promotional material describes the percussive backbeat as sounding like "a dead army of marching skeleton men," and yeah, that's about right. "God's Away On Business" has the same sort of sound. I do believe Voltaire is similar at times, if you're looking for musical comparisons. However, Voltaire has never sounded like his vocal cords were being tortured on a cheese grater.

In "Another Man's Vine", Tom gets the blues and his lament rings true: "Golden Willie's gone to war/He left his young wife on the shore/Will she be steadfst everyday?/Along the way her letters end/She never reads what Willie sends." Oh, those wicked, wicked women!

The music of Tom Waits always transports me to another world: a nasty, dirty world filled with cold-hearted women, out-of-luck drunkards, amoral junkyard men, and forgotten dead soldiers. Although I don't want to stay here too long, Tom makes the stay tempting in a demented fairy tale sort of way.

RECOMMENDED TRACKS: "God's Away on Business", "Another Man's Vine", "Misery is the River of the World"