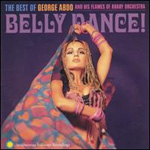 I was very happy when I discovered Smithsonian Folkways was putting out a collection of George Abdo's music. Belly Dance! is an excellent compilation of this most influential musician, and while the music is intended for belly dancing, it is also great for the discerning listener. George Abdo and his contemporaries often placed full dance routines on their albums—this compilation is no exception—which provide plenty of opportunity for dancers to demonstrate their prowess. Abdo was also very influential in the worldbeat genre. Although the music is acoustic and performed with traditional instruments like the oud, darbuka, and bouzouki, the sound is far from traditional. Rather, the sound fits into a genre fellow performer Eddie Kochak referred to as Ameraba. In it he mixes up different world sounds, coming up with something groundbreaking. He combines Turkish, American, Sephardic, Greek, Armenian, Lebanese, Syrian, Egyptian, and Greek sounds with his crooning voice and diverse instrumentation. Abdo's background was in both pure Arabic music and rhythm and blues singing. Thus it's no surprise that his belly dancing songs are tinged with North American music sensibilities. In "Ruh Tum Bi Salama" (Go In Peace), his voice is even reminiscent of Tom Jones' heavy-handed masculine sensuality. The music has a very `60s or `70s feel to it—not in the disco or psychedelic sense, but in the now retro belly dance sense. The music is still fantastic for dancing, but listening to the music makes me think not of dancers in heavily-beaded designer bedleh, but of dancers in homespun costumes made with coins, bells, and chain mail. Indeed, the dancer on the cover (Sultana Noga) looks like she's wearing a home-made costume, with dollar store plastic bangles and her bra covered with a purchased Egyptian hip scarf. I think dance costuming trends are returning to this thrifty look, and perhaps dancers will also return to the tried and true sounds of George Abdo. I can only hope Smithsonian Folkways decides to put out compilations of Abdo's contemporaries like Eddie Kochak, Artie Barsimalian, and Mohammed El-Bakkar. RECOMMENDED TRACKS: "Hadouni, Hadouni", "Ruh Tum Bi Salama", "Raks Araby", "Noora Ya Noora"