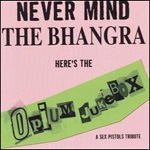 Once upon a time, not so very long ago, there was a small music label called Invisible Records. They hosted all sorts of avant garde industrial acts, like Pigface and Meg Lee Chin and Sheep on Drugs. The music was difficult listening—the very antithesis to adult contemporary music—relying on backbeats and way too many mind-altering chemicals. Then something funny happened. The label's focus slowly drifted away from industrial into a weird sort of fuzzy space, motivated perhaps, by an entirely different variety of mind-altering chemicals. Martin Atkins, Julian Beeston, Bobdog Catlin, and Rahul Sharma got together and formed a bizarre band called Opium Jukebox. They wanted to do some mystical-sounding Indian music, but at the same time, didn't want to stray too far from their alternative music roots. What to do, what to do? They covered the Sex Pistols, of course! And thus Never Mind the Bhangra Here's the Opium Jukebox was born. Sid Vicious would almost certainly have barfed all over this CD. It is not true to the original "destroy everything" intent of the band. I think that's why it's so amusing. Never Mind the Bhangra comes across as a muzakked Ravi Shankar-sounding thing, with occasional elements of that Invisible sound I was talking about earlier. Only the barest bones of the original songs' melodies are retained. Everything else has been chewed up by a sitar and spit out onto a glistening, shiny CD. I think Opium Jukebox may have done for punk what Pat Boone did for heavy metal. Take that as you will. RECOMMENDED TRACKS: "Anarchy In The UK #2", "God Save The Queen", "New York"