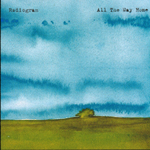 All the Way Home
Endearing ( http://endearing.com/ )

The wide expanse from the Manitoba-Ontario border west to the Pacific Ocean is remarkably desolate save the occasional outcropping of humanity and the somewhat more frequent clouds of black flies. It's a teeth-gritting journey at times - being able to see the Rockies practically from Saskatoon, but never having them loom any larger across your windshield. If it weren't for the occasional fencepost whizzing past, you could swear you were standing still. That empty space between the cloistering heat and the endless strip of asphalt is exactly where you'll find Radiogram. On All The Way Home - their second full-length - they create the kind of sound that clogs your pores and sinuses the way gravel dust gets into every nook and cranny. You could call it a prairie musical sensibility or you could deem it Canadianamericana if need be, but ringleader Ken Beattie and co. conjure a starkly rich portrait of small town love and loss as uniquely reverential of the big sky country as almost anything Ian Tyson has ever penned. On this disc, Beattie's assembled an almost perfect cast of musicians, including lap steel guitarist/banjo player Jonathan Anderson, and the deliciously sublime Ida Nilsen (also a founding member of Vancouver's Beans) on trumpet, keyboards, accordion, and backing vocals. Beattie's musical vision is so pervasive even a New Order cover ("Love Vigilantes") wouldn't sound out of place on a rural Saskatchewan jukebox. If Canada had a Grand Ole Opry, Radiogram would be headliners each and every week - or at least perpetually stuck on the highway on the way there. RECOMMENDED TRACKS: "Whiskey In My Bed", "Summer Song Summer", "Merry-Go-Round"