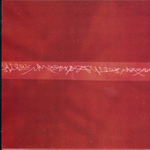 There's no such thing as a quiet place in New York. Certainly not in Manhattan, where four in the morning in the Bowery outpaces the average Canadian rush hour. In comparison, Brooklyn is downtown's introverted kid sister. Shy and unassuming, she's so quiet most of the time you forget she's there.

This is the environment that surrounds Julia Frodahl. Under the guise of Edison Woods, she's released a debut album that sighs forth barely more substantial than an exhaled breath.

Admittedly that may not come across as a ringing endorsement, but in my somewhat limited vocab, "insubstantial" is not a synonym for fluffy or lightweight. Rather, it implies an almost ghostlike presence.

Many of the cuts on this record are comprised of a bare skeleton in the form of a simple keyboard line. Fragments of vocals, cello or brushed snare are then draped across the bones like strips of cloth. It's a formula that works consistently, if imperfectly. With the exception of "Fear & Yearn," none of the tracks manage to build significantly on the initial melodies and seem to recycle the same phrases over and over, making this release more like a work in progress than a finished piece.

Still, it's a promising debut for a young songwriter. Frodahl just needs to realize that skeletons at least musical ones are capable of growth.