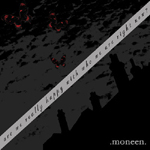 Are We Really Happy With Who We Are Right Now?
Smallman ( http://smallmanrecords.com/ )

It's amazing to think that this is only Moneen's second full-length album and yet suddenly these Brampton Ontario kids find themselves poised to take over the world. This is going to be the album that propels them to the ranks of emo stardom, and deservedly so. Unfortunately, that does not necessarily mean that this is their finest or most memorable work to date. To be sure, Are We Really Happy With Who We Are Right Now will sound very comfortable and familiar to anyone who has heard their previous recordings -maybe a little too familiar. One of the album's weaknesses is that there are no surprises waiting for the listener. It's the same dreamy, layered guitars turning into chugging stop/start riffs, the same wordy song titles and the same sappy lyrics sung in the same vocal patterns. Although these things have become Moneen's trademark in a way, they are also beginning to sound a bit stale. With their steady surge in popularity it's a shame that they haven't done much to re-invent their style, especially considering that their style doesn't sound very new or different anymore. Anyone hearing Moneen for the first time could very well be tempted to label them Taking Back Sunday wanna-bes, and what a misleading assumption that would be. This is because, if anything, Moneen have simplified their music by cutting out some of the sonic experimentation that was found on their last album and replaced it with more standard emo fodder. Kenny and Chris still fiddle with their delay pedals at the end of every other song, but it's more out of habit than anything else. I guess it should come as no surprise that their first album for Vagrant Records is also their most poppy and accessible release so far. In Moneen's world melody has always been paramount, but this time they've gone overboard. Producer Trever Keith (better known as the frontman for Face To Face) has emphasized the vocal melodies at the expense of just about everything else, and it ironically makes the songs seem more sterilized and distant than emotional. Even the token piano song ("I Have Never Done Anything For Anyone That Was Not For Me As Well") sounds like exactly that... a token piano song. Maybe the hardest thing to swallow about this album is that it simply doesn't have any of the urgency or intensity that Moneen are known for in their live performances. Sure there is some screaming and some attempts to sound edgy on songs like "Start Angry... End Mad", but it's only an illusion, one that quickly fades when the pretty-sounding guitars fade in. As underwhelming as the album feels, however, I have to admit that it does a good job of capturing Moneen's youthful energy and it still manages to rock out at points. In particular there's a new recording of the song, "With This Song I Will Destroy Myself", previously only heard on a Brampton-area compilation, not to mention songs like "Closing My Eyes Won't Help Me Leave" and "Life's Just Too Short Little Ndugu" (the latter seemingly inspired by the movie About Schmidt), all of which are trademark Moneen songs proving that if the songwriting formula ain't broke, perhaps it need not be fixed. Considering that this is only their second full-length release, maybe hopes of a reinvented Moneen are a little much at this point. If you're looking for something new and exciting on this album then it's going to be kind of a bummer, but if you're just interested in hearing what the newest Vagrant band is all about, well you're in luck because this album proves that Moneen are a perfect fit on Vagrant's roster, and they don't have to suck to do it.