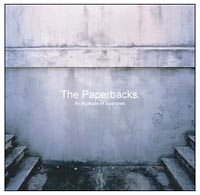 An Episode Of Sparrows
Pshaw! ( )

I dislike hardcover books... they're overpriced, big and bulky, and they're awkward to carry around and read. It's almost like they're specifically made to collect dust on your shelf. Plus, after you've read a hardcover book all the way through, it remains unmarked and unchanged, completely indifferent to your perusal of its contents. Something about the paperback format just feels a little more warm and personal. Their fragility allows a favourite book to become creased and earmarked with love. Okay, so I'm probably taking this metaphor a bit too far, but The Paperbacks are precisely the kind of band you can curl up with on a rainy day, losing yourself in the soothing melodies and poetic lyrics as you watch the rain trickle down the windowpane. Fronted by Doug McLean, formerly of Painted Thin and The Bonaduces, The Paperbacks lack the overabundance of youthful energy that these previous bands had, but make up for it in beautiful songwriting. McLean's voice is instantly recognizable to anyone familiar with The Bonaduces; on An Episode Of Sparrows however, his vocals are not as whiny or abrasive as they sometimes were in this previous band. Complementary backing vocals help to smooth out the melodies on most of the songs. Bonaduces fans will also find more familiarity here, as bassist Jaret McNabb and drummer Jack Jonasson join McLean once again, along with Tanya Zubert (The Mandarins) and Jason Churko (Transister Sound & Lighting Co.). Listening to this record, comparisons to The Weakerthans and Jets To Brazil come to mind, minus the folk influence of The Weakerthans, and the faux British accent of Blake Schwarzenbach. The album isn't all as laidback as you might assume, with songs like "Who Will Run The Starfish Hospital" and "Plans In Advance" rocking at least as hard as the Bonaduces did a few years ago. Still, it's some of the quieter moments that stand out the most, such as "Local Celebrities", a song about indie music scenes, and "Letters Vs. Numbers". Most of the songs tell vague stories, and just like a good paperback, they're full of heart-felt drama, romance and intrigue. If you're into soothing indie rock and power pop, this is what you're looking for. Once you pick it up, you won't be able to put it down.