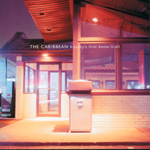 When you think of Caribbean music, what do you hear? Steel drums? Reggae? Easy-listening smooth jazz? Well, as far as the band The Caribbean is concerned, none of these apply -- but for a band hailing from the Washington, D.C. area, they've done a pretty good job of creating a soundtrack for lazy summer days of shimmering sun and tropical heat. History's First Know-It-All is a bit of an unexpected release for Endearing Records, a label that I knew, up until now, mainly for straightforward Canadian indie pop bands like The Bonaduces and The Salteens. Perhaps I simply didn't know the label as well as I thought I did. This is the second full length record from The Caribbean, and it is mostly a laidback affair consisting of a mixture of acoustic guitar and waves of reverb, piano, and subtle drums and bass. Sometimes the songs are completely instrumental and other times decorated with soft, murmured vocals, but always dreamy and relaxing. Occasionally they mix in samples of birds chirping and other found sounds, along with synthesizers, harmonica, and various other instruments. This assortment of audio tools may make it seem like The Caribbean are very experimental, but the end product here is nothing overly challenging or confrontational... just a nice collection of warm, lo-fi pop tunes. A few of the songs stand out above the others, simply because they are more upbeat and feature more prominent vocal hooks; in particular "It's Unlikely To Settle The Difference", a haunting brit-pop influenced sing along, and "Annunciator Zone", an indie rock number that meets somewhere between the sound of Eric's Trip and Pavement. The band members assemble most of their songs by sharing bits and pieces of audio recordings via e-mail and a process of long distance collaboration. This explains the scrapbook feel to this album, with each song resembling a montage of sound and melody. For all of the record's beauty however, it is also a tad on the boring side. It makes ideal background music when relaxation is the goal, but it doesn't offer up quite enough substance to keep an active listener engaged for the entire duration.