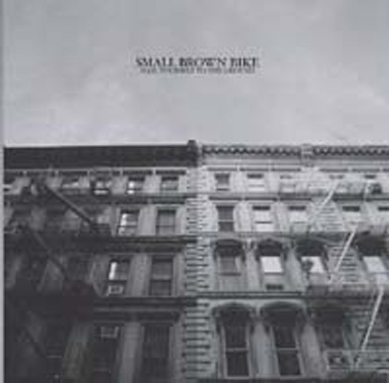 Nail Yourself To The Ground
Smallman ( http://smallmanrecords.com/ )

A North American tour with Edmonton's Choke last summer lead to, among other things, a Canadian distribution deal for Small Brown Bike with Smallman Records. Fitting? I think so. The first SBB release under Smallman is this EP entitled Nail Yourself To The Ground. It's a co-release with their former U.S. label No Idea Records, and a prelude to their upcoming full length on Lookout! Records. Nail Yourself To The Ground features 5 new exclusive tracks, which is nice to know because after all, who wants to fork out cash for an EP only to have most of the songs appear on an upcoming album? The songs are mostly what you'd expect from a post-punk band nowadays: duelling jagged guitar riffs and raw emotive vocals. That's not a bad thing either. The songs are catchy without leaning towards pop-punk, and aggressive without bordering on that annoying screamo trend. If Braid, Cursive and Hot Water Music are your thing, then Small Brown Bike should be your new favourite band. The EP's only questionable moment is also the one place where it strays from the aforementioned formula. I'm all for trying new things, but the honky tonk slide guitar on "So I Fall" is a little bit too sappy and awkward to fit in. If you can appreciate or at least overlook that track, then this little EP is definitely a keeper. Look for more interesting things to come from this band in the near future.