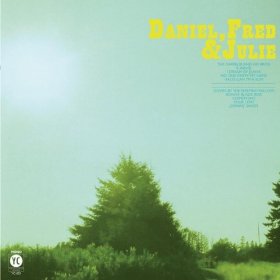 The greatest accomplishment of Daniel, Fred and Julie is the inspiration it creates. Arranged and recorded over a few days in the summer of 2009 in a garage in Sackville, New Brunswick, Daniel, Fred and Julie demonstrated that it is possible to get together with friends and make a charming album over a weekend.
No overdubbing, no editing, just one track of a tape machine recorder, one microphone, three voices and two acoustic guitars. The record only comes in mono format. They drew from public domain lyrics, older folk songs and original material. The two originals fit seamlessly on the album and illustrated the trio's versatility as musicians and incredible gift for song writing, both tracks belong in an old folk songbook or in a dusty record collection somewhere. Ignore the fact that all three musicians are in multiple and overlapping indie rock bands who are constantly touring and recording, all the songs were revisited, recreated and recorded in the same place together with friends. How could it not turn out great?
"Runner," written by Romano and sung by Fred, is a brutally honest tale about a young man with itchy feet . If you are thinking about quitting your job, listen to Julie on "Hallelujah I'm a Bum." It may give you the push you need (or don't need). The classic "Clementine ," with local music legend Del Wheaton on the fiddle provided this sound that makes you feel like you grew up around the corner.
For these artists it represents a mellow break from their rock sensibilities in such bands as Attack in Black, Calm Down It's Monday, Eric's Trip, Julie Doiron, Shotgun & Jaybird. Daniel Romano, Fred Squire and Julie Doiron have made this quick experiment into something very special that now sees them touring in the spring of 2010.