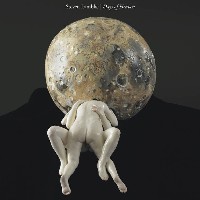 Steven Lambke doesn’t have a silky voice -- not even close. But like Neil Young, Bob Dylan and Lou Reed before him, Steven’s coarse vocals aren't a detractor, instead they imbue his new album, Days of Heaven, with distinct quirk and charm. His scratchy tones have been present throughout his previous four recordings, but with this, his fifth LP, he seems to have found a strong way to showcase it. His solo work has been maturing ever since his time with art-punk band, The Constantines. It was 2006, Steven first ventured from the band nest, under the name Baby Eagle. The extremely lo-fi debut release was a big departure from the sound of The Constantines. Steven recorded the augural solo effort in Winnipeg, MB with fellow Canadian musicians, John K. Samson from The Weakerthans and Christine Fellows (want proof?! John and Christine’s dog barks on one of the tracks). With each subsequent release, Steven has become more listenable in the mainstream sense. His 2012 Bone Soldiers release is more rhythmic and ruckus than his earlier albums. It felt like a “party” album where Steven was gaining courage and dexterity with his rare vocal tool and talent. Since then Steven has dropped the Baby Eagle moniker in favour of his birth name. It’s as if Steven was a fledgling with his previous Baby Eagle LPs. Now he’s embraced his identity and his voice as a solo artist. The new album put out by You’ve Changed Records, masterfully juxtaposes Steven’s rough voice with beautiful string arrangements created alongside violinist Mika Posen from Timber Timbre, paired with vocals from The Weather Station’s Tamara Lindeman. These contrasting elements highlight the sweet and sour notes of Steven’s abilities and make the final composition truly resonate. This album is his most fully realized and the one I’d use to introduce a newbie to Steven Lambke with. Then I’d follow-up with the remaining adventurous and challenging discography of this distinctive voice in Canadian music.