Sleep Beneath The Willow

Come Cry With Me 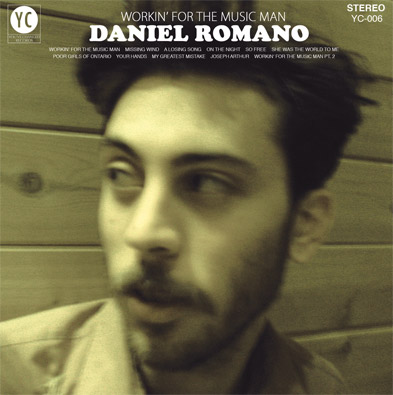 At what point does a writer stop referring to a solo artist in terms of the band they are most known for? To be up front for a second, this is the biggest dilemma I have come across when attempting to sum up Daniel Romano’s first solo record, Workin’ For The Music Man.
Romano, while technically most known as the frontman of one of Canada’s most beloved young rock bands, Attack In Black, has began to carve out his own little niche in our national music industry. His record label, You’ve Changed Records, has been releasing a solid string of great material over the past year, and Romano himself has added to it with his excellent debut record.
Music Man is a pastiche of folk and country. The songs, as typical of the genres, speak of loss and love. Romano, who has played with the genres before, most recently as part of the “supergroup” of Julie Doiron, Fred Squire and himself (Daniel, Fred & Julie), seems more at home this time.
His songs are stronger, and his stories more believable. This is a record of confidence in his craft. Songs like “She Was The World To Me” and “A Losing Song” feel real. This doesn’t feel like the lead singer of a former punk band attempting to write a Woody Guthrie record. This feels like Romano’s voice.
Sure, there are hints of traditional folk music. He injects a new life into such Canadian folk classics like “The Saskatchewan Girl’s Lament”, but he is not just ripping off and borrowing from the past.
My lone complaint about the disc is that Romano seems to be singing in a different voice. While in Attack In Black his voice is much more rough. There is no twang. However, on this release his voice seems forced by comparison.
I get why it is done, but the effect is lost on me. If he had sang the songs on Music Man in his normal voice, I think the record would have been that much better. That said, it is a small complaint on an otherwise excellent release.
Romano, to some, will always be the frontman of Attack In Black, but it is hard to not see the line he drew in the sand.