More By The Pack A.D. 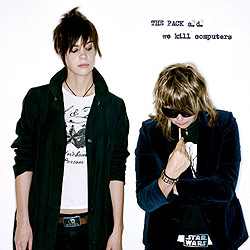 “The elevator opens for no one,” sings vocalist/guitarist Becky Black in “Everyone Looks Like Everyone,” the second track off of The Pack A.D.’s third full-length album We Kill Computers.
And it’s a good thing, too, because this is no elevator music. The Vancouver-based garage-rock duo – comprised of Black and drummer Maya Miller – have loaded their latest release with vicious vocals, hard-hitting percussion and grungy, distorted guitar riffs that won’t be fading into the background anytime soon.
Although much akin to the ‘small band, big sound’ tradition of The White Stripes, The Black Keys and other thunderous twosomes, The Pack A.D. still manage to carve out their own powerful sound. And while We Kill Computers marks a departure from the band’s previous blues-heavy releases, it plunges confidently into the grungier side of rock, resulting in the group’s gutsiest and grittiest – not to mention loudest – record yet.