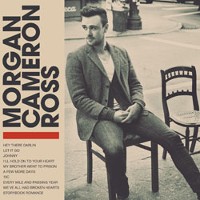 There are not enough words to describe one of the best talents to come out of Canada in the past number of years than Morgan Cameron Ross.
All songs on his debut album are simply memorable right from the drop of the needle on the first track, “Hey There Darlin.”
This young man, from Toronto, has written over 100 songs and I can hardly wait to all of them and more make their way to the airwaves. I for one am delighted, to say the very least, that Morgan was allowed to sing and arrange the songs any way he pleased. His music sense must have been tingling at the time since the entire album flows nicely, great mixing and orchestration that can be played in any setting.
In 2010 many of the songs, like “My Brother Went To Prison,” “13 C,” “Let It Go” and “Storybook Romance are stories that can be fictional or taken from the pages of his life.
“I’ll Hold On To Your Heart” (featuring Holly McNarland on guest vocals) is about loving someone long after the break up. Ron Sexsmith co-wrote “ We’ve All Had Broken Hearts” begins with the capturing line “sure seems I don’t like happy.”
If Morgan Cameron Ross is not holding a Grammy or Juno in the next five years, assuming he keeps putting out great productions like the inaugural self titled album, I would be utterly surprised!