More By My Son The Hurricane

Is This What You Want?! 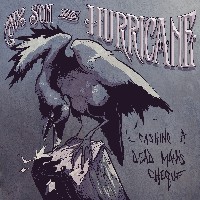 If complacency is the death of a band, then My Son The Hurricane is the antithesis of complacency.

Cashing A Dead Man's Cheque, the bands' new EP defies anything you've heard before from them.  It is a scant three tracks but those songs pack a wallop worthy of brass knuckles.

If it's possible, emcee Jacob Bergsma has even more vocal swagger in "Call Me Mister".  He triggers a strong response either way.  Before you pass judgement you should try fronting a fourteen-piece brass band at full velocity.  The band is tight and those horns do not back down.

"Pigeon Park" could very well be the perfect storm.  The song has an outstanding balance of sung chorus and spoken verse between the voices of U.S.S.'s Ash Buchholz, multiple Juno nominee D-Sisive and a well-behaved Bergsma. This balance is echoed by the rhythm and brass section of MSTH - the song just rolls.  Someone should give these guys an award for collaboration.

The previous two songs in no way prepare you for what's coming next.

"Poison In The Water"  shreds your senses.  What business does a brass band have playing Metal...like that?  My Son The Hurricane has effectively smashed whatever perception we may have had of them in the past with this song.  It grabs your guts from the beginning with searing guitar, the pummeling that drummer Danno O'Shea gives, and the build up of horns.  There is no let-up until you are released by Jacob's primal scream.  You feel like you've been looking at something you shouldn't be, and you just can't help it.

Cashing A Dead Man's Cheque by My Son The Hurricane is a spectacle of sound.