More By My Son The Hurricane 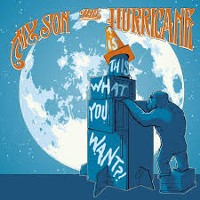 Is This What You Want?!
Vegas Funeral Records ( )

My Son The Hurricane is a 14 piece “brasshop” band that forges hip-hop, funk and jazzy brass band style with enough propulsion to blow your hair straight back.

Headquartered in St. Catharines, The Hurricane have turned up the heat with their latest release Is This What You Want?!

Front man Jacob Bergsma has such bombast and swagger in his voice, that he’ll either have you grooving to the flow, or wanting to punch him in the face.  Either way, his coiled energy is well matched to the wall of sound he fronts, making everything seamless.  Playing foil to Bergsma is Sylvie Kindree who makes her MSTH debut on Is this What You Want?!  She carries a certain kind of sway all her own.

“Smoke and Mirrors” is good primer for an introduction to the band, before you get hit with “Birthday Cake”.  It’s here where you’ll really start to ‘catch the wind’ that is My Son The Hurricane.  They’re in full force with Sylvie providing the vocal release from the tension built by Bergsma and all those horns.

The tracks that follow will have you dancing or thinking or at least thinking about dancing.  Then “Grapes” slams into you at the end. “Grapes” is reminiscent of Tom Waits in his clang bang era. With voices panned left and right, the song gives you a clammy kind of vibe before you are promptly thanked and are done.

When you strip all the dance party away, what you will find are words that are well thought out, expressive, and tap into our shared modern experience. They have stuff to say.  You’ll find musicians who work their craft, in order to pull this off with a high level of proficiency and intensity.  Listen to the greasy, funky bari sax solo by Phil Skladowski on “Birthday Cake.”  Put all this together with the evolving imagination of drummer and ringleader Danno O’Shea and you have the makings of a perfect storm called My Son The Hurricane - whose credo is “Anything worth doing is worth overdoing.”

If you can’t get yourself to their much heralded live shows, grab the album Is This What You Want?!  and crank it.