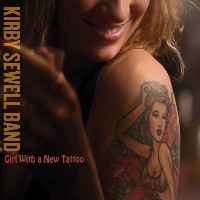 The Kirby Sewell Band, a raucous, blues styled band with a soulful underlay has let loose with their third album Girl With a New Tattoo.  These ten road worthy tunes will help get you to your destination a little faster than you anticipated.

Front man Kirby Sewell is described as a ‘blues shouter’.  A blues shouter is essentially a singer who is able to sing unamplified with a band.  Don’t let that title mislead you. He is equally capable of soft, tender moments with unexpected range and emotion.  Fortunately for us Kirby Sewell is amplified so we can hear every heart hewn word.

The band is Jim Johnston – drums, Neil Gunhold - electric & acoustic guitars, back-up vocals, Morgan Turk – electric guitars and Jae Cho – bass.  They are a tight collective with a driving, propulsive sound that provide a rock solid backdrop for Kirby to play off of.   When you have a band this good, it’s best to give them room to groove and there’s plenty of space on these songs for them to do just that, together or solo.

Neil Gunhold – guitar, wrote all of the songs save one, “Kiss You Tonight”, which was written by Neil and Kirby.  The songs sound like they were tailor made for Kirby Sewell who brings them to life with his vigorous personality.

The opener “The Devil’s In the Details” is a song that is built from the ground up with the instruments layering in one at a time with Sewell joining at the top.  It’s an effective introduction to the Kirby Sewell Band before they take you with them on an energetic journey of artfully blended blues, rock, funk, and soul.

The title track “Girl With a New Tattoo” is a rollicking fun song that showcases the band’s personality. Track six,  “$1.11” is an example of just what a ‘blues shouter’ does, though it sounds a little uncontrolled at times.  “Simply Not Enough” and “A Better Reason” show a softer, emotional side of Sewell.

If you’ve not heard the Kirby Sewell Band before, Girl With a New Tattoo is the album to familiarize yourself with their sound.  It’ll get under your skin – like fresh ink.