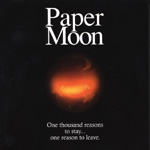 One Thousand Reasons To Stay, One Reason To Leave
Endearing ( http://endearing.com/ )

Marketed as new wave but nowhere near such, Paper Moon is an exercise in flagrant violations of (unwritten) musical code. Specifically, contrary to close to 99% of the records I've listened to over the course of my life (and that's a lot of albums), the group's strongest material is actually found on the second half of One Thousand Reasons To Stay, One Reason To Leave. Usually, bands put their best songs upfront in the hopes that lazy listeners who won't listen past track four will still catch the good songs. However, Paper Moon has courageously tracked two of the three album highlights at number eight ("The History Of Punctuation") and ten ("Memories Through Photographs") respectively. Of course, the album's best song ("Sno-Globe") is number three, so my theory isn't dead on (but who said music reviewing is a science?) So, what's actually found on One Thousand Reasons...? Airy, breezy indie-pop, mostly. The new wave tag probably got incorporated because synths totally copped from The Cars' first record are all over the place. But with guitars mixed low and vocals mixed high, the edginess of Elvis Costello and the rest of the new wave scene is nowhere to be found on this Winnipeg band's debut. And that's part of the problem. Though the songwriting department is in check, the performances are thin, and Allison Somers' baby-doll/sugar-sweet delivery gets old very fast. Vocal register dynamic (ie. changing tone, key and rate of forcefulness every once in a while) could really elevate this band's style. But, back to the positives. What One Thousand Reasons... does have is good songs, and in the end that's what it's really all about. Each of these ten tracks is a love-lorn tale, and it's somewhat refreshing to hear the female perspective on this issue, especially since the demonization women have faced at the hands of the emo boy-bands (New Found Glory, The Ataris, Saves The Day, etc.). The aforementioned "Sno-Globe" is the top cut on the album, and its despondence and desperation clearly shines through. The diametrically opposite "Memories Through Photographs" is a faster, more synth-laden track, perfect for non-committal, pseudo-romantic walks through the park, or solitary (but not sad) drives around the city. Fun, but not overtly so. Sad, but not whiney. I guess what Paper Moon has found is the coveted middle ground. RECOMMENDED TRACKS: "Sno-Globe", "The History Of Punctuation", "Memories Through Photographs"