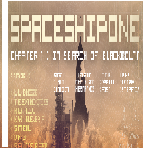 This mixtape from 1812 recordings features the gamut of contemporary, commercial-sounding independently produced Canadian rap. Featured artists include; Reema Major, Kayo Gueverra, Babylon Warchild, Progress and The Lytics. Tracks are are owned and published by the artists, producers and respective labels, and complied by 1812 Recordings (1812 Entertainment LLC). The names are artists to recognise; the general sounds are strong-willed, determined and unique phonemes of rap musicality. SPACESHIPONE Chapter 1: In Search of Blackboltt is intelligent, and the “[...] sounds are well-rounded” (Relic). Select tracks on the mixtape are thematic and characteristic of an explicit, counter-intuitive “thug” nature, not for the weak of heart. Braggadocio as a tool is present in the raps. The beat production is exemplary, as is the use of cutting-edge samples. Hilarity as an undertone is also present, as is a well-structured Canadian hip-hop compendium in process. The vibrancy is an example of some of the reigning sounds from the hip-hop underground. The “canard” culture du jour is “... defending our country against a powerful unknown threat” (1812 Recordings), and the release of the various artists' album (Spring 2012) was also accompanied by a limited-edition comic book.