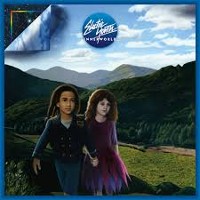 Electric Youth is a duo recording in the Electro/Pop genre. Their debut album, Innerworld, was recorded in Toronto and L.A. They share a personal relationship in life and also a musical one. Bronwyn Griffin, the vocalist, exudes smooth, mellow lyrics, while Austin Garrick, the music maker, conducts synth sounds with electronic beats. Various other contributors appear on the album; not all songs are written by Griffin and Garrick. The fifteen-track disc explores various enchanting, and intriguing melodies with electronic accompaniment.

It is a strong beginning for the duo; they have had a rising interest in their music and videos. NME and Rolling Stone magazine have had great reviews of the new release (2014). The band formed officially in 2009.

The formula throughout the album is the same: soft, hushed, dreamy, and impressive synthesizer, and female vocals. Depending on how one feels about synthesizer music (reminiscent of the 80's in electronic music), you may well find the album rather monotonous and humdrum; synthesizer dominates Innerworld with various added exploratory electronic effects. Garrick possesses a terrific vintage synthesizer collection providing for many of the analogue sounds on the LP. Innerworld is well-intended, and great care was taken in its production.