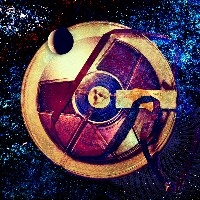 The remix album is a Creative Commons of Saibotuk's Tacital Tape Loop Division (2008). There are six contributing artists: 18U, T.Phillips, R. Chartier, J. Carey, Coingutter and ScantIntone. They have created an album that sounds intimately undecipherable one track from another. There are glitch, pop, hiss and echoing noises that are experimental, electronic micro-noisescapes of drone and dub, that at times feature melody and even electronic mimicry of natural ambient sounds like thunder and lightning. The compact disc artwork is beautiful and astronomically oriented. When probed further it is the work of fairypunk.ca Is it math music, an esotericism of meanings, do the samples have underlying movements when explored further? Are there secrets in this music? A description paragraph on the album proper reveals, “ [...] gathering the spirits of the dead on electromagnetic tape [...] this be dead media that unwinds time from its spools”. Albeit, a listen is an enjoyable experience and the light exploratory frequencies are musically inclined, and not altogether inconsumable.