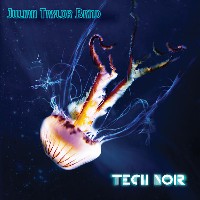 An album that wants to appeal to the whole Blues community from the old-timers and purists to the innovators and newcomers -- or at least that is how it plays in these ears. Toronto-based Julian Taylor Band offers up songs that venture down into the garage-inspired Black Keys vibe like “Never Gonna Give You Up”, some dabble in neo-soul including “Do You Remember” and “Hurt Me”, funk inspires the cut “No Guns” and then there’s a throwback to the slick sounds of 1990s Blues with “Other Side” and “Zero to Eleven”. Clearly, it’s important for any album to have variety on it, but there’s a certain point when it tips the scale and becomes unfocused. That’s what has happened on Tech Noir, despite Taylor’s undeniable talent and bombastic presence. What is consistent on the album is the level of production. It is densely packed. There is wall-to-wall sound on each song with multiple elements and layers, backing vocals and horn sections. Due to this overproduction and the ambiguous character of the recording, the album comes off as frantic, an attempt to showcase everything Julian has got in one go. I get it; the impulse to make a dense recordings; it's an understandable one. However, this approach ends up distracting from the talent that Julian obviously possesses.