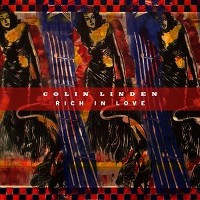 More than 10 solo albums to his name, and close to that number of albums with the band Blackie & The Rodeo Kings, Colin Linden is entrenched in the Canadian music scene. He, like his fellow Rodeo Kings, Tom Wilson and Stephen Fearing, has a loyal following of fans who consistently buy his releases and attend his soft-seater concerts. This 12-song LP, Rich in Love, will definitely satisfy those folks as it delivers what Linden has offered previously -- guitar-driven country blues, singing of love gone wrong, missed opportunities and wondering what if. This album does not break any new ground, nor does it depart from what Linden has been delivering for at least two decades. There isn’t an evolution of his sound, lyrics or approach. But why should he change? He has a winning formula that draws baby boomers in and provides them a consistent, familiar sound. If it ain’t broke, why fix it?!