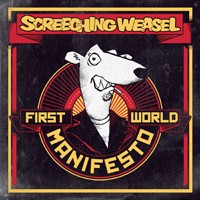 2011 was supposed to be the year Screeching Weasel finally cashed in.

After many, many years of legal disputes and less than stellar releases, both as a band, and in the case of mercurial front man Ben Foster, solo records, it would have been a safe bet that finally things were going to be heading in a positive direction.

Lawsuits no longer an issue, in March, 2009, Foster (aka Ben Weasel) opted to restart up his cash-cow and make another go of it. He recruited former Weasel member, and current band-mate in The Riverdales, Danny Vapid to rejoin the band, and rounded out the cast with a few lesser known characters. Of course, given Foster’s history, this was not done without a large amount of controversy as for the first time in the band’s history, founding guitarist John Jughead’s name would not be listed as part of the squad.

That aside, they started by playing some really well received and sold out shows, and by the time they had hit Toronto last year, Foster was talking about a new record.

The band, who had created some absolutely landmark records in the early 90’s, were never able to find the level of success that would await bands like Blink 182, who Screeching Weasel clearly inspired. Instead, they like most pioneers of the genre, became legends, but legends that could only be talked about in small circles of those in the know.

That all said, punk rock is a very different game than it was in 1991. There is money to be made now. There are endorsements to secure. There are record labels with over 20 years of experience to help market your records.

And while I do not claim to know Screeching Weasel’s reasoning for reforming, these are all things that can only be viewed as benefits of making that choice.

On March 15, 2011, the band released its first album in 11 years, First World Manifesto. By March 23, the band seemingly had broken up again. Foster had punched two women at the band’s SXSW show and the band had quit on him. Issuing a statement on the 23rd, the former members said “we will not likely be able to muster the dignity to attempt a live performance as 'Screeching Weasel' in the for-seeable future."

And with that, it ended.

All of the build up and all of the momentum: All of it, over.

But what seems to be overlooked in this mess is the fact that First World Manifesto is a fantastic record. Clocking in at just over 29 minutes, nearly all 14 tracks are well written, and fun to listen to.

Tracks like “Beginningless Vacation” and “Friday Night Nation” can be held up against some of the bands more definitive songs with pride.

In typical Foster fashion, the songs alternate between themes of love and discontent. On one track, he will be singing about missing his love (“Dry As The Desert”), while a few songs later he is taking shots at just about anyone who talks down to his band (“Little Big Man”).

The record is angry, but not angry enough to have it be a distraction. No one really wants to sit back and listen to a guy in his 40’s bitch and complain for 40 minutes about how hard his life is.

For every “Come and See the Violence Inherent in the System” or “Follow Your Leaders" there is a fine counter balance of love songs. It’s really hard to dislike this record.

My lone complaint would be that the production of Mike Kennerty, who is a member of The All-American Rejects, tends to put Foster’s vocals too heavy in the mix. At times, his nasally tones can be a little heavy, but really, it’s a minor complaint.

Besides, perhaps the album’s greatest asset is that Frank Portman, former lead singer of one of the greatest pop-punk bands of all time, The Mr. T Experience, sings a verse of the track “Frankengirl”. Anytime Dr. Frank is involved, good things are sure to happen.

But at the end of the day, people will likely remember 2011 as the year that Ben Weasel punched some women and his band, which showed so much promise, disintegrated for all to see.