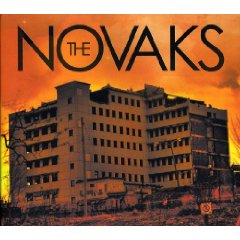 Somewhere between the soulfulness of Sam Roberts and the hard rock of AC/DC, you will find The Novaks; A drunkeness-inspiring rock band hailing from St. John’s, Nfld.
The band deals almost exclusively in guitar driven heavy rock. Something you could expect to hear playing in nearly every tavern this vast country has to offer.
After a four year break between discs the band has just released Things Fall Apart, which, while technically well played, didn’t do much for me. I can’t say it is a bad record. It is far from bad. The guitar is stellar at times, and the band seems to be very good at what they do, but I think that’s the problem. This type of music is much better live then on wax because some of the spontaneity, and improvisation is naturally lost.
At times during Things Fall Apart I found myself drifting off into thought, and not paying attention to the music. Live, I am certain this would not happen. I am positive that the band would keep me entertained throughout their set with sheer talent alone, but for whatever reason, and for lack of a better term, I found their new disc boring.
I gave each song a bunch of listens, hoping it would finally grow on me, but they never did. Songs like “Billy The Kid” and “Cold and Lonely” are g If they came to town, I would gladly buy a ticket, but I don’t think their brand of music goes over too well unless you are witnessing it first hand.