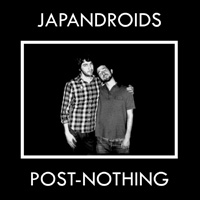 All too often, once an album gets hyped in the way the debut from Japandroids has, I usually find myself letdown by it.
A record, which receives nothing but critical appeal can be a hard thing to listen to in an unbiased way. You are almost destined to hold it up to some preconceived idea of what it should sound like, based on things you have read about it. Before reviewing the record, anything I read about it was nothing but high praise. The often overly critical site Pitchforkmedia.com even called it “terminally catchy music played with punk's enthusiasm and velocity”.
Post Nothing is a digital and vinyl only release. Surprisingly, this album not only lives up to expectations, it may surpass them. Guitarist and co-vocalist Brian King, and drummer and co-vocalist David Prowse, have created one of 2009’s best releases.
For a two piece band, they play their instruments with such passion and fury that it sounds like there are at least two of everything. Opener “The Boys Are Leaving Town” hooks you within seconds of its first notes, and doesn’t let go until the album is well over. While there are only eight songs on Post Nothing, it feels like a full length mostly due to the rather long songs. The powerful “Crazy/Forever” goes on for over six minutes, but when it ends you wonder if it could not go for longer. This is indie rock the way it should be written. This album does not get boring, or clichéd. Even after multiple listens, I am still impressed with the craftsmanship. There is nothing formulaic about Japandroids’ music. This is energetic and fresh sounding music that deserves all the hype and accolades it receives.
There really isn’t a whole lot more you can say about it. Simply put, if Post Nothing is not on many people’s year-end lists, of their favourite albums of 2009, I will be truly surprised. I know it will be on mine.