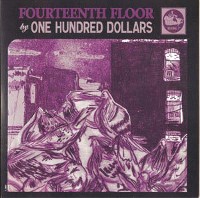 Much in the vein of the folk, and country music tradition they play, Toronto’s $100 have offered a great follow-up their 2008 Forest of Tears record. As musical as it is poignant, the band has started, what will become a national project of sorts. They are begining to release a different Regional Seven-inch single per province. Each will be on a local record label, specific to the area, and will deal with the some of the issues each region is facing.
Starting in Ontario, the two songs here are both good examples of what makes $100 such an enjoyable band. The first song, “14th Floor”, deals with a cancer patient on the 14th floor of the Princess Margaret Hospital in Toronto. The song is sad, no question, but it is sung by vocalist Simone Fornow with such a longing in her voice, that it really gives hope to an otherwise bleak topic.
The flip side of the record features Mr. Final Fantasy himself, Owen Pallett, playing the fiddle on “Migrant Workers”, which is about the Mexican and Jamaican labourors who come to Ontario every year to work on the farms. The imagery of which really resounds with me, as I have lived in an area where this occurs nearly all my life. The song provides a voice to the people who are paid less then minimum wage, to work 12 hour days, just to send the money home to their families.
If the first of the series is any indication, $100 are onto something great. Even though there are just two songs on this release, there is a lot here. I am eagerly looking forward to hearing about the rest of the country from such a talented band.