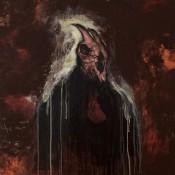 Easily the most anticipated Canadian metal album of the year, Calgary duo Mares of Thrace return with The Pilgrimage, a more focused and unrelenting album than The Moulting (their previous, debut, album). Having really found both their groove and target this time out The Pilgrimage seethes with rage, both musically and lyrically. Make no mistake though, this is not a mindless berserker rage, Mares of Thrace know where to focus said rage and take aim appropriately. Much like the previous album, the songs on The Pilgrimage have a live jam-like feel to them which allows the listener to easily get caught up in the screaming vocals, the punishing swirl of the baritone guitar and the heavy-as-a-brick-wall-dexterous-as-a-ballerina drumming. While the ‘jam’ aspect is still very apparent on this album, the songs feel more complete, more purposeful on The Pilgrimage. There are fewer experimental tracks on the album, but what is there helps with the overall heightened sense of urgency and creepiness. ‘Triple B’ for example, is an electronic noise mess, but could easily fit into the sound track of the original ‘Silent Hill’ video game series. Add to this the production of Sanford Parker, and the songs and album as a whole seem bigger, fuller, and to an extent scarier.
The music of Mares of Thrace, steeped in noise, angular riffs and irregular time changes, has never been for the faint of heart, but tracks like ‘The Pragmatist’ with its threat of “This is the beginning of the end!” and ‘The Perpetrator’ with its guttural opening vocal and down tuned, classic rock feeling guitar passages, are the aural equivalent of a middle finger to people who think music needs to follow a particular formula to be good. At the same time, Mares of Thrace have also created some damn catchy music. Both the aforementioned ‘The Pragmatist’ and ‘The Perpetrator’ have both headbanging and toe tapping moments, ‘Act III: Bathsheba’s Reply To David’ has a few galloping, almost danceable parts to them and ‘The Goat Thief’ starts off slow and creepy building into a fierce wall of sound with an excellent guitar riff break, then back to slow again with some spoken word buried amongst the guitar and noise. Beautiful.
There is a lot of passion in this album, Mares of Thrace have really given it their all here and the passion comes through. This album will, no doubt, be on a lot of year end ‘Best Of’ lists and deservedly so. Highly, HIGHLY recommended.