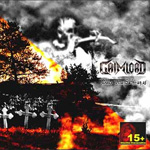 First off, Grimlord doesn’t suck and I’m actually surprised by this. I assumed that, given the cover art, name and the fact that the band is Polish, they would be just another bad Vader rip off. I was wrong and I apologize for my preconceived notions. In fact, I thought I had put the wrong CD in the play when the album first started…with an almost circus like intro…and gosh! Clean Vocals!!!! Turns out they have some prog-metal tendencies as the majority of Dolce Vita Sath-an as is instrumental, which would normally turn me off immediately, but they actually play as a band. Most instrumental records seem to be one guy widdling away while the rest of the band makes background noise, but Grimlord have constructed solid songs, which actually makes me wonder if Barth just didn’t have lyrics written when they went into the studio.

Lukass plays the ‘Drumhammer’ like he’s actually using a hammer at times, but even the rapid-fire double bass is tempered with a more traditional metal feel in both the guitar and bass. The vocals on this album range from depths of hell death growls to high pitched (what I like to call) alt. metal singing that would make the Mike Patton crowd happy. I do also admit that on first listen I swore the chorus in “Oh! My King”, Barth LaPicard was actually singing ‘Coma Geek’ which made for some very questioning looks before I could get my hands on the cover again. . “Shade of Wrath Angels” is a nice instrumental piece that allows the band to stretch a little, and gives Barth a chance to really use his synth and they follow it up with another instrumental, which is more on the progressive end of things, entitled “Ground Zero”. My biggest complaint about the record is the fact that they did stick all of the instrumentals back to back without a break. Personally, I would have moved the tracks with vocals around a bit.

All in all, Grimlord are solid players and make for a tight sounding band on record. I think fans of traditional metal and prog-metal with a little death like tendencies will really get into this album. I’m very interested to see where the band goes from here.