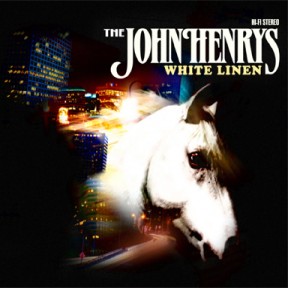 The John Henrys aren’t just songwriters, they’re storytellers with an incredible knack for putting you in a place that’s familiar but not necessarily specific. White Linen has a definite Americana feel to it: the storytelling vibe of Tom Petty clearly shines through in lyrics and phrasing particularly on ‘Little One’. ‘Cold Chill’ takes an interesting turn into an almost mellow ‘60’s psychedelic intro before turning the anger up a notch and becoming a little harsher and louder. A love for Gram Parsons is also evident in the beautiful vocal harmonies of songs like ‘Piece of Mind’ and even some Elvis Costello pops up here and there in Rey Sabitin Jr.’s vocal performance. Yes, you can easily pin down the influences on the band, but The John Henrys craft something that is uniquely their own. Every member of The John Henrys is quite obviously very accomplished on his instrument, and the band seems to write songs with this in mind. Every instrument gets equal billing in the mix, no burying of the bass or keyboards for this band.

Much of White Linen seems to be written with regret or a lost love in mind. Even something that almost sounds upbeat like ‘White Linen’ is really not a very positive song. Though any song with banjo and what sounds to me to be a Hammond B3 can still make me want to dance! Sweet As The Grain (The John Henrys previous record) had a more ‘jam band’ feel, White Linen features songs that are more concise, and perhaps more purposeful. The songs are a definite growth for a band that has been touring and playing live non-stop since well before their last album was released. Admittedly, it took about 3 listens for me to really ‘get’ this record after falling in love with the previous album, but now I can’t stop spinning it. I can’t wait for it to come out on vinyl so I can hear it the way all great music should be hear, on a record player with headphones! This is a stellar pick and easily a favourite for 2010.