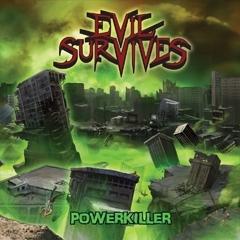 Evil Survives does NOT produce CD’s. They are traditional metal through and through, all of their music is released on vinyl. I think maybe a cassette single may be in order at some point as well, but I digress. Part of getting an album right (and we’re talking ALBUMS here kids, not CD’s or collections of a couple of singles and a pile of crap) is getting the packaging right. For a traditional metal band, having Ed Repka do your artwork is like stamping ‘Dave Mustaine Was Here’ on your record. Vinyl Only cred? Check. Bitchin’ Artwork? Check. Now we need to talk about the musical content which usually sinks most bandwagon bands.
In the case of Evil Survives, not only are they able to float, they’re ramp jumping most of the other bands aping the New Wave of British Heavy Metal sound. In fact, anything said about ‘bandwagon’ or ‘aping’ is unjust or plain ol’ unfair when it comes to this band. Evil Survives live it/love it/play it. This is real metal for real metal fans. The twin guitar sound is tight and it’s damn catchy as well. You will find yourself humming guitar lines not knowing what it is until suddenly Axe N’ Smash’s crazed vocal screams ‘Judas Priest Live’ in your brain and you’ll put your fist up in the air as a salute to the subversive metallic brilliance of Evil Survives. And the guy in the cubical next to you will be afraid.
Axe N Smash (seriously, I could do without the silly stage names) has a traditional voice that invokes many of the masters, but isn’t a carbon copy. You can easily imagine him in spandex, leg warmers and high tops with one foot up on a monitor. Hell, that might be how he spends his afternoons for all I know. The rhythm section of Evil Survives is also worth mentioning: tight and well played without over playing. Everything is solid, and adds to the actual song. No wanking for the sake of trying to prove who uses the smaller cucumber (think about it).

Not a bad track on Powerkiller and although it’s really good, it doesn’t quite DESTROY. It only kills, a lot. I have high destructive hopes for the future power of Evil Survives.